A Traveler Visits the State Parks of Columbia County

Anyone who doesn’t live in Florida may not understand that there is more than one Florida. Cosmopolitan Miami is vastly different than rural Minneola, just as the bright white beaches of Cocoa and Clearwater are distinctly different than the cool, shaded springs found in Florida’s Big Bend. It was this degree of diversity that first sparked my fascination with my native state. Many years later, I’m still on the road and still discovering new places. One place that led to many happy return visits is Columbia County. For me, this is Florida, undisturbed. Unspoiled. Even better, its rivers and springs and forests add even more opportunities to experience Florida in its natural state.

“For me, this is Florida, undisturbed. Unspoiled.” Down a Lazy River

Having worked in and written about theme parks, it’s refreshing for me to travel to Columbia County where, I swear, there’s not a single virtual reality ride. Instead the appeal is reality, pure and simple. You’ll see it in crystal clear oak-lined rivers that no theme park can replicate, and find it in the woods, waters and wildlife of some of Florida’s finest state parks.

Among the very finest is Ichetucknee Springs State Park near the town of Fort White. This park has mesmerized me ever since I was a teenager because all you have to do is wade into the river, stretch out on a raft or inner tube, and then allow the current to transport you gently down the crystalline river for the next several hours.

In the peak summer season rangers reduce the impact on the river by limiting admission to the full 3.5-mile river run to 750 guests a day–a number often reached within the first half-hour. But even on those days and throughout the year, guests can enjoy a generous 60-to-90 minutes of the Ichetucknee experience y putting in at Midpoint or Dampiers Landing.

No matter how many times I visit this idyllic setting, I am transfixed by the speckled sunlight filtering through the canopy of oaks, by the slow-motion wave of eel grass in the current, and seeing turtles and fish seemingly suspended in the glassy water. Only one other Florida river surpasses Ichetucknee’s fame, a river that became a legend because a man was looking for just the right word… A River Runs Through It

Steve was a pop musician working on a new song when his brother suggested he open the tune with a line about South Carolina’s Pee Dee River. Stever rejected that and his brother’s other suggestions until the two cracked open an atlas, scoured the map for rivers, and found the right one.

The year was 1851 and Stephen Foster was one of America’s most prolific composers, his melodies becoming synonymous with the American South. Recognized around the world, one of his loveliest songs (“Beautiful Dreamer”) was even performed and recorded by the Beatles a century after it was written. So influential was his work that in the 1950s the state created the Stephen Foster Folk Culture Center State Park for which I am eternally grateful. One of my favorite parks, I love it because when I’m here I am immersed in the beauty of Foster’s compositions. I see it in vintage dioramas that are a kitsch, yet sincere, tribute to the vivid imagery of his lyrics, and I hear it in the soothing melodies that drift from the 97-bell campanile before sailing across the expansive lawn and disappearing into the piney woods.

Whenever I stroll through this peaceful place, it’s like walking back in time; especially so at Crafters Square where quilters, blacksmiths, weavers and other artists keep the past alive with their handiwork, some of which is sold in the nearby general store. If you go (and you should), keep in mind a calendar of festivals and special events includes the famed Florida Folk Festival which has made its home here each May since the 1950s. If you can’t pull yourself away, don’t. The park has a campground as well as five rentable riverside cabins. 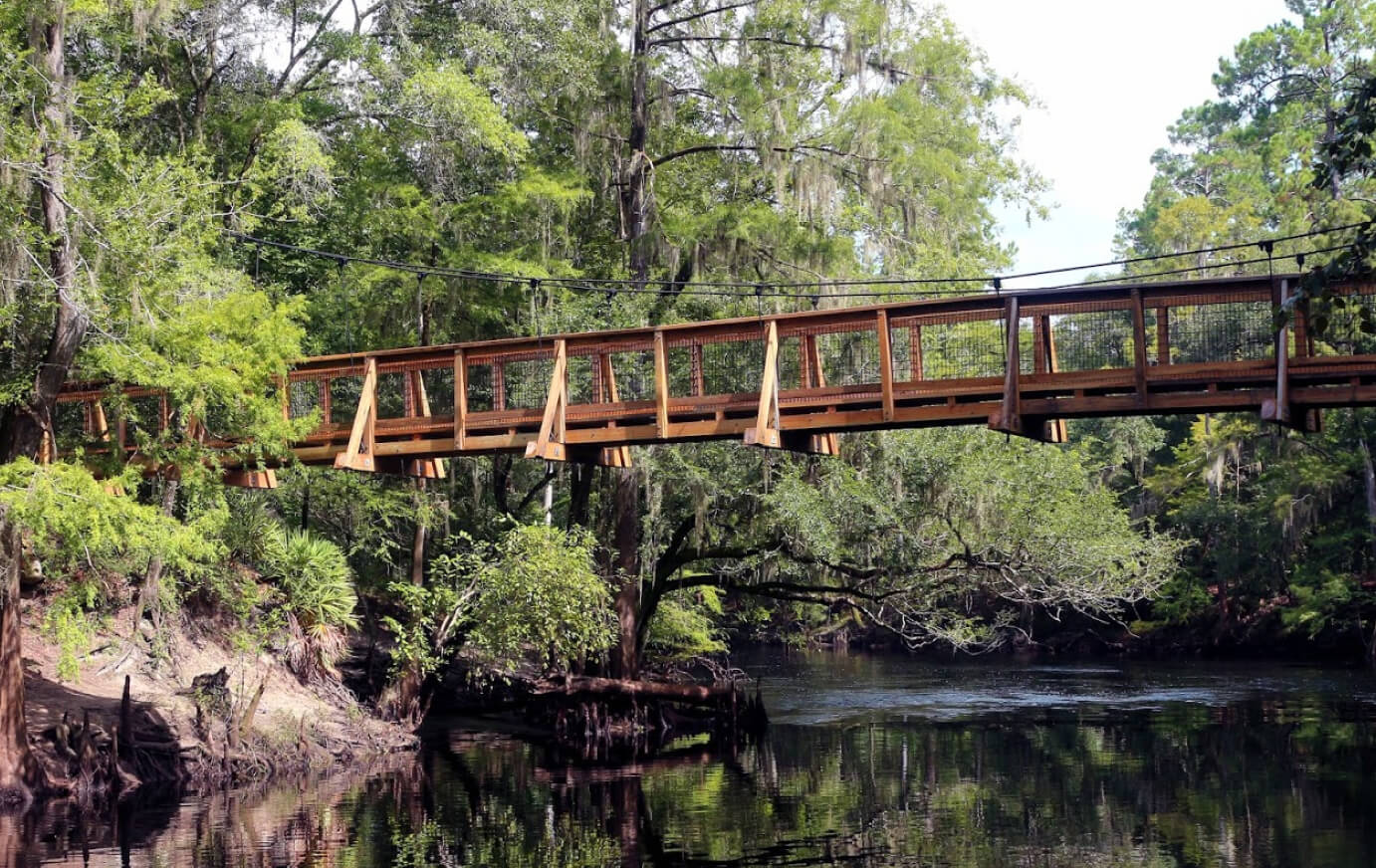 Not every ghost town was in the Old West. In the 1890s when the local railroad took a new route to Fort White, it took with it the commercial heartbeat of Leno. Gone were grist mills, saw mills, a hotel, and post office. Gone, too, was the name. Over time locals began to refer to the abandoned village as ‘Old Leno’, which, over time, was contracted to O’Leno.

If, like me, you have a passion for history, you’ll have a passion for the place that would’ve been forgotten forever had it not been for Franklin Roosevelt and the Civilian Conservation Corps (CCC). With citizens ready to work their way out of the Great Depression, men from the CCC transformed the forgotten village into O’Leno State Park. Thanks to them, the land remains a sanctuary centered around the Santa Fe River.

I’ve found the soft lulling sound of the Santa Fe, especially where it spills over a small dam of rocks and boulders, to be especially soothing. Seen from the vantage point of the water (easy via canoes and kayaks) as you drift past the riverbanks you’ll see folks fishing or resting or easing into the water for a swim. In an age when most of us are talking, texting, or easing into our emails, it’s remarkable to see people engaged in a more natural use of time.

Speaking of time, it’s impressive that something created in the 1930s enjoys such sustained popularity, but this park does. Nearly every single day, solo travelers, families, and large groups arrive to remind themselves of what nature has to offer. On overnight visits and extended stays they pitch tents in the campgrounds or stretch out in more than a dozen sleeper cabins. Bathhouses, a dining hall, recreation hall, basketball, volleyball and horseshoes are other reasons to make “Old Leno” a new destination. By now you may have guessed that the Suwannee River is a large presence in the north Florida, Columbia County area. Until I visited Big Shoals State Park, I hadn’t realized exactly how large.

This 400-acre park is known for a number of things including a towering bat house (which is a good thing since more bats = fewer mosquitoes), and it’s also known for 28 miles of wooded trails that accommodate hikers on foot and people on horseback. But out of view of most visitors is the park’s namesake, i.e. the Big Shoals rapids.

Reaching the rapids means hiking about a mile to the vantage point of the park’s 80-foot high limestone bluffs. And that’s only so you can see the rapids below. To actually get into the water, you’ll drive down a series of roads until, at the end of Road 6, you can park and then haul your kayak a half-mile down the Mossy Ravine Trail. Provided you’re experienced at handling Class III whitewater, this is where you can dig into the fast-flowing water and tackle the fastest rapids in the state.

“And there’s nothing else in Florida like Columbia County.”