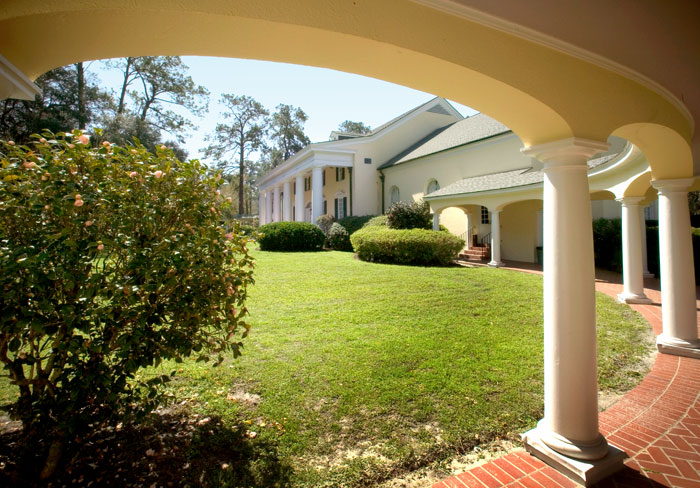 Beating the heat doesn’t always mean taking a dip in the pool. During the summer months in Florida, Columbia County’s museums and cultural centers become hot spots (no pun intended) for locals and visitors to cool off and take in a history lesson. These cultural and interpretive centers provide great outlets to learn about the area. Get ready to get a dose of Old Florida, here is your art and culture guide to Columbia County.

Located in Fort White, Ichetucknee Springs State Park attracts visitors for its crystal-clear river, towering trees and a wealth of wildlife like deer, wild turkeys and raccoons. After hiking or canoeing the area, stop in at the park’s Education and Exhibit Center, where an impressive display of pieces found in the springs shows the biology of urban growth, water usage and the impact they make on the river. There, you can walk through a replica of a spring cave to understand the biology of how the water flows and forms underground caverns. Rocks and fossils unearthed by cave divers are part of the interpretive exhibit, and before wrapping up the day, you are advised to visit the movie theater to watch a film about the mysteries of the spring.

Get a glimpse of what life and the area looked like in the 1870s at Columbia County Historical Museum. Located in Lake City, this museum has a pristine collection of artifacts, and the staff will also dress up in period attire to breathe life into a house built in the 1800s. The house was previously owned by the Vinzant family, and much of the original furnishings are still in immaculate condition for you to admire. Guided tours are available at the museum, but it’s suggested to make the appointment in advance instead of walking in so the tour will be ready for you when you arrive. During the tour, a guide will walk you through different rooms to see the genealogical research display and rare heirloom pieces left behind by the family. In addition to the family heirlooms, you’ll browse through various artifacts from Native Americans, Civil War, WWI, WWII, and early residents of Columbia County. Monitor the museum’s website to catch any upcoming scheduled events such as making candles and sewing garments.

Visit a train station turned into a museum at Olustee Depot near Lake City. The building has stayed in pristine condition and is nestled in the woods under Spanish moss trees in the Osceola National Forest. This museum has all things locomotive that the kids will love and has hands-on activity stations where you can press buttons to hear the sounds of the county’s wilderness. The exhibit tells the tale of the building’s history serving as a medical station for wounded soldiers during the Battle of Olustee. Before that, the station was an iconic destination in the South that exported goods and helped boost the economy. Afterward, lounge on its patio next to the train tracks and wait for the train to pull up.

If you’re familiar with Florida’s history, then you’ve heard about the famous Battle of Olustee, one of the bloodiest battles of the Civil War. The victory kept the Confederates in control of Florida’s Interior for the rest of the war. The battled resulted in 2,807 casualties, resulting in the Union’s retreat to Jacksonville. Today, Olustee Battlefield Historic State Park, Florida’s First State Park, is the place to learn about the 1864 battle. The center displays artifacts from the battle, items worn and used by soldiers, and even some ammunition that was left behind in the trees.

In the park interpretive center, you can watch a short video documentary about the battle and learn the tactics used that aided in the Confederate victory. If you’re passing through Florida for the winter, make sure to add Olustee Battlefield to your list of places to visit. Every February, the Olustee Battlefield Historic State Park and their Citizen Support Organizations bring history to life with educational and living history exhibits and the historical reenactment of the Battle of Olustee.

O’Leno State Park is another fantastic destination to get your nature fix. But did you know you could visit its three interpretive exhibits, including a nature center, Civilian Conservation Corps Museum and Bellamy Road Interpretive Panels while exploring the park? If you’re an animal lover, you’ll especially love the nature center as it’s filled with native animals of the park, including tortoises, deer  and other year-round residents. The center has a built-in sanctuary to rehabilitate rescued animals before they are released back into the park. Civilian Conservation Corps is a work relief movement developed by late, former President Franklin D. Roosevelt, where inexperienced workers earned a living during the Great Depression. The entire Civilian Conservation Corps Museum will educate you and your group about the impact the movement made for families struggling during this era. Bellamy Road has its own center that highlights the road’s history as the first major highway in Florida, which was built by slaves.

Stephen Foster is a well-known Pennsylvania lyricist who wrote many old hits like “Old Folks at Home.” At Stephen Foster Folk Culture Center, the museum features the composer, crediting him for making the Suwannee River famous with a chronological display of his accomplishments in music. In addition, the Antebellum building houses dioramas depicting some of Foster’s most well-known songs. The park is also home to one of the largest musical instruments in the western hemisphere, the Carillon Tower, with 97 tubular bells. The park also offers demonstrations of quilting and a variety of seasonal crafts, hiking and biking trails, paddling and even camping. Plan to stay awhile by booking a campsite or one of the park’s five riverside vacation cabins and make your stay in Old Florida a grand experience.

Please note: This story has been updated to reflect most current information as of October 2022.